Nephrectomy means removal of kidney. Nephrectomy has many indications, for both simple and radical approaches. A simple nephrectomy is indicated in patients with irreversible kidney damage due to symptomatic chronic infection, obstruction, calculus disease, or severe traumatic injury. Radical nephrectomy is the treatment of choice for localized renal cell carcinoma (RCC). In certain circumstances, radical nephrectomy is also indicated to treat locally advanced RCC and metastatic RCC.

With the advent and increasingly mainstream use of abdominal CT scanning and ultrasound imaging in recent years for various abdominal and, occasionally, chest complaints, incidental detection of RCC has increased in asymptomatic patients.

Currently, more than 50% of RCC cases are detected incidentally. These tumors tend to be smaller and of lower stage, resulting in better survival rates, lower recurrence rates, and lower metastasis rates than RCC detected in symptomatic patients.

Symptomatic RCC presents at a significantly higher stage and grade, and tumors are substantially more aggressive than incidentally discovered lesions, particularly at later stages. Several factors have been associated with increased risk of RCC.

However, a familial predisposition is identified in less than 2% of RCC cases. 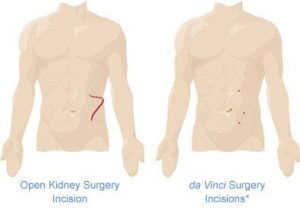 Online opinions have their own limitations. This opinion is based on the reports submitted and may vary with further investigations and examination of the patient. This opinion is only for guidance. It is strongly recommended you make an appointment with the doctor in person with all the available reports for further management and treatment. In case of emergency, please contact the local doctor/hospital.